3D Photo Maker is a script developed for After Effects to animate your photos in a 3d scene with just a few clicks!

The script, compatible with all Windows and Mac systems, was born from the need to always have at your fingertips a tool for turning a simple 2D image in a 3D animated image, recreating a third depth axis.
You will thus be free to move your camera in a three-dimensional space, giving “life” to your photos.

What are the advantages of a script if compared to a template?

Another advantage of the script compared to a template is that you never have to go crazy in front of dozens of compositions and precompositions and furthermore, the script does not use expressions which slow down the execution of the animation preview and rendering.

The script performs all these calculations instantly without overburdening your project!
(Attention: Due to a known bug in the After Effects CC 2015 13.5 version the script doesn’t work properly so please update your AE version to 13.8) 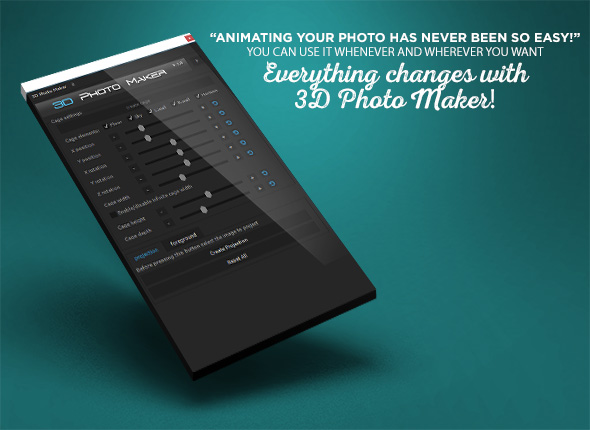 How does 3D Photo Maker work?

3D Photo Maker has been optimized to make your job very easy.
The only thing you have to do is to align a grid that will be created automatically on the image that you want to project in 3D.
To do this, you can use simple control sliders in the script window.
Once you have done this, you only have to press the “Create Projection” button and your image will be projected instantly in a 3D environment.
It is also very easy to insert elements in your scene: you just need to open the “Foreground” tab, place infinite objects and then, using a slider, move them in the 3D space just created.

As you are working in a 3D environment, you can safely enable and animate the depth of field of the camera, getting an even more realistic effect. 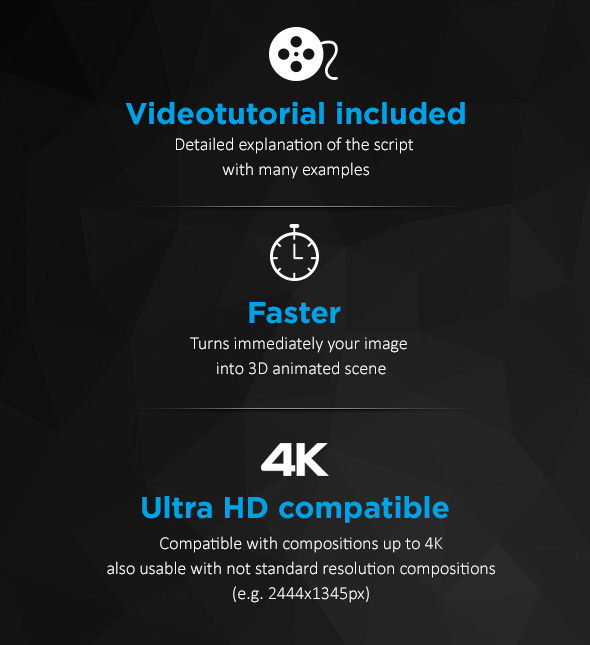 All the images used in this video preview are not included, as well as the song that you can download from: https://audiojungle.net/item/hybrid-action-trailer/16700556